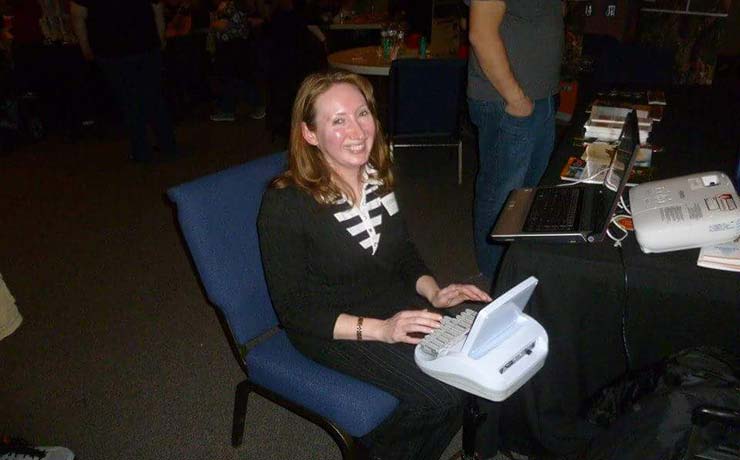 Saturday, March 10th, 2018, was the fourth time that I have volunteered to help with the Deaf Institute’s All About Deaf Kids Fair at Cincinnati Christian University.  This fair is free and brings together different public services and community members to help enrich the lives of deaf and hard-of-hearing children and their parents in the greater Cincinnati area.  There are many booths with a variety of fun, hands-on activities for everyone.  Several ASL interpreters and student interpreters are present to assist communication.  Assisting in communication, that’s where I get on board!

Since I do not sign, I always receive the wonderful help of an ASL-to-voice interpreter.  The first year I attended, I was only present for the luncheon’s main speakers.  My laptop was connected to a projector, and the text was shown on a screen up on the stage, pretty basic.  The second year, I used the projector, but I also had a notebook computer that people could view.  The third year, last year, I used the projector, but I stayed a bit longer and had some NCRA pamphlets explaining CART, and I had three iPads so that I could demo how CART works. 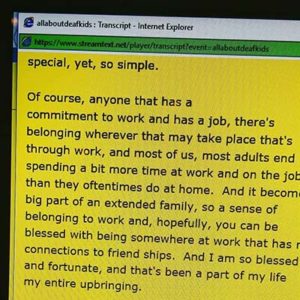 That brings us up to this year, and this year I did not use the projector at all.  Instead, I set up a Streamtext session to run during the whole fair.   This way, participants could just use their own smartphone to go to the link and stream the words whenever they wanted.  There was one small technical glitch, which Streamtext support had remedied within 30 minutes.  I alternated sitting in two of the four “story corners” and wrote the story that was told, and I still covered the luncheon speaker.

The guest speaker for lunch was Mark LaRosa of the LaRosa’s Pizza family.  This year’s theme was Belong.  Mark spoke about the importance of belonging in the community, with your family, at work, in sports, and through civic and church entities as well as how to endeavor to include others in your world and place yourself into different environments.  And, yes, we were all provided pizza and salad for lunch!

During the time when there wasn’t a story or a speaker, I was able to talk extensively to six people about who I was, what I was doing, and how my weird machine works.  One person was a parent of a deaf child, two were interpreters, one was a student interpreter, one was an audiologist, and one was a hard-of-hearing adult.  It’s always surprising to me how little even the community that uses the services of captioners and CART providers really know about how everything works or even the extent of what’s available to them.

The use of ASL interpreters and my streaming CART combined helped to make the day’s events very accessible to everyone so that we all could Belong!

Lisa Conley Yungblut is a Mike Mobley Reporting court reporter based in Cincinnati, Ohio. She has been a reporter since 1989. Lisa is active in the Ohio Court Reporters’ Association (is a Past President), on the Advisory Board for the judicial reporting program at a local college, actively engaged in improving her skills and has mentored many court reporting students and interns.