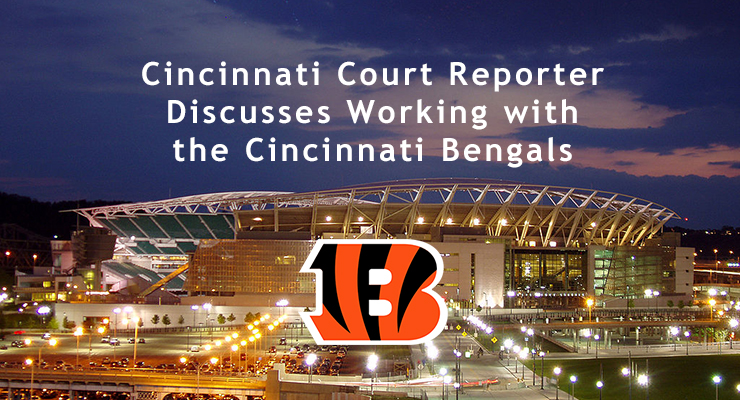 A few years ago, our office sent an e-mail to several court reporters asking for a volunteer to stream home Cincinnati Bengals games, not that we fully understood what that entailed. Football not being my favorite sport or one I knew a lot about, I let it pass, thinking that someone else would enjoy it more. A little time passed and nobody else volunteered, so I somewhat reluctantly decided to give it a try. This was in December 2013 with only three games left in the season.

Never having used Streamtext, I downloaded the Streamtext Connector and read the online instructions about the program. This is not broadcast captioning seen on TV. It is the play-by-play calls only, and my shorthand steno goes from my steno machine to my laptop where a dictionary matches the steno with the English words and translates it, and then it moves through Internet to the Connector, and then can be seen either online or via the Cincinnati Bengals phone app.

For these first few games, I went to the stadium press box area. The first game, they had me sit in the general area with the “regular” reporters. This meant that I could overhear not only what I was supposed to be writing, but also the big screens in the open lounge, all of the chatter around me, and the referee calls. The next game, I moved into the booth with the announcer. Seeing how that all happens was interesting. The view is not as great as you would imagine. There are two other men who use binoculars to assist the announcer, and the timing of what he says is extremely precise in order to not overlap with things happening on the Jumbotron. A Gold Star buffet is the halftime snack because once you are admitted into the press area, you cannot leave until the game ends.

That first season, the Bengals played a home Wild Card playoff game in January, which I attended. The atmosphere was very exciting, despite being bitterly cold outside. There were a lot of past players at the game, including one who stopped by the announcer’s booth at halftime to say hello. Hopefully, it didn’t show too much, but I truly didn’t know who he was, although, you couldn’t miss the big Super Bowl ring he was wearing. We were introduced, and it was Ken Anderson and his wife! (For those as clueless as my former self, MVP and All Pro quarterback.) My friends and family were much more excited than I was about that, and I was teased a bit for not recognizing him.

Due to the hassle of obtaining security clearance, parking, and just the inconvenience of squeezing one more person into the booth, the next season, the Bengals IT staff began allowing me to work from home using a phone connector on their end and my cell or home phone and home internet connection. I can now phone into the press box and hear the announcer. The first couple of times, there were a few glitches, but the two IT guys resolved the issues, and it works great now. So yes, I have in my cell phone contacts list “Bengals Press Box.”

Having covered nearly three seasons now, it has gotten much easier than in the beginning. I have the player rosters printed and in front of me.  I spend about 60 to 90 minutes before the game writing the names and making briefs (shortened forms), for the opposing team name, city, and players’ names, being sure that none of the briefs for the opposing team conflicts with a Bengals player’s name. Also, I just quickly write through all of the Bengals names as a refresher. The stadium gates open 90 minutes before game time, and that is when I also call in and log on to do a test to make sure both the audio is good as well as my text. When the announcer starts introducing the players is when I begin working. I do not watch the game because the televised broadcast is several seconds behind the feed that I am following. When the announcer is not speaking, I can also hear the DJ music, the touchdown jingle, some of the Jumbotron stuff, some referee calls, and sometimes I overhear something being said in the booth. Fortunately, by now, I can easily discern all of that and just use it as a break and to fix any translation errors. The pace of the job is different than a deposition or other proceeding. It’s only the one voice and he can be somewhat fast, but it’s in spurts of probably 30 seconds to a minute, and then there will be a penalty or some other timeout, and then another quick play. It’s hurry up and write, wait, write, and continuing like that, so there’s not a rhythm to it at all.

As happens I think with all court reporters, my job has brought about new opportunities that I would have never expected. Now I understand a more about football in general, and I am fully comfortable working with Streamtext. Sometimes it’s good to do something you don’t think you’ll like!

If you’re not familiar with how a court reporter or captioner can type as fast as they do, here’s a quick explanation:

Some of the Cincinnati Bengals briefs I’ve created are:

Lisa Conley Yungblut is a Mike Mobley Reporting court reporter based in Cincinnati, Ohio. She has been a reporter since 1989. Lisa is active in the Ohio Court Reporters’ Association (is a Past President), on the Advisory Board for the judicial reporting program at a local college, actively engaged in improving her skills and has mentored many court reporting students and interns.